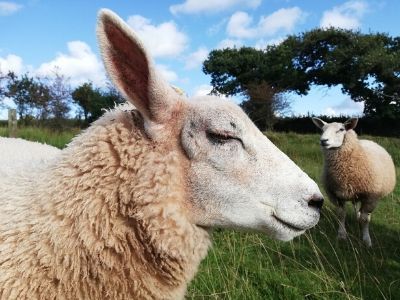 We rear pedigree non-short Dexters firstly because we often supply pedigree breeding stock to other smallholdings, and secondly because Dexter beef in and of itself has an excellent reputation and is much sought-after for its quality and taste - something which is regularly borne out by buyers travelling some considerable distance to acquire it. Additionally, pedigree Dexter beef attracts a premium which is lost if crossed with another breed.

Our pedigree herd of Boer goats follow the same general pattern. The offspring (both bucks and does) provide pedigree stock to other breeders. Those that we don’t sell on as breeding stock are sold for meat. Boer goats are allegedly the only goat in the world that is exclusively reared for meat; this is of high quality, lean and low in cholesterol. Whereas it is true that a pedigree Boer buck can be crossed with a dairy goat to produce a ‘meat goat’, the consequence is that the quantity and quality of meat inevitably suffers since there is really no other breed that can come close to a pure Boer goat with regard to meat production. Our objective is to provide nothing but 100% Boer meat. 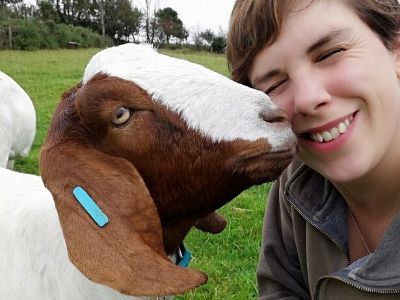 The pig situation is more interesting. Several years ago when we reared our own stock, we bred pedigree rare breed pigs (Gloucestershire Old Spots, and Oxford Sandy & Black pigs at different times). Just as for the cattle and goats, some were sold as pedigree breeding stock and the remainder for meat. However, we currently do not breed pigs; we now purchase specially selected young weaners and rear them outside in a genuine free-range environment. By doing this, we can either choose full pedigree rare breed pigs, or we can opt for the offspring of two different pedigree rare breed pigs – it is important to note that we always use rare breed pigs in any crosses. Unfortunately, due to various reasons, our breeding contacts that we used to sell to when we bred pedigree pigs also chose to stop breeding around the same time as us. Since then, we have found that there can be distinct advantages (both to us and to our customers) in rearing cross-bred pigs from different rare breeds. The main advantage is due to a condition known as ‘hybrid vigour’; put simply, it is the tendency of a cross-bred individual to show qualities superior to those of both parents. Conversely, in a small population pool, as some of our rare breed pigs have found themselves, the propensity for inbreeding can lead to the offspring getting smaller, less fit, less fertile and often not living as long as their parents. We had a very interesting case recently when we reared some Saddleback x Gloucestershire Old Spots crosses; they had the muscular shoulders of a Saddleback along with the large hind quarters typical of a Gloucestershire Old Spot. They went down a treat with our customers! However, if we were to return to breeding our own pigs, they would, once again, be pure-bred pedigree; without pedigree rare breed breeders, there wouldn’t be traditional pedigree rare breed pigs. 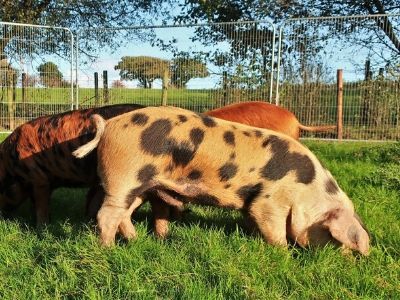 The explanation as to why we use cross bred lamb is even easier to explain. Unless one is rearing a pedigree herd to supply breeding stock to others, a significant majority of the lamb sold for meat is the result of cross breeding where an expensive pedigree sire of a breed known to produce good meat quality is introduced to a more varied flock of (comparatively cheaper) ewes. This produces an all-round good meat-producing animal, without the limitation of a heavy price tag.

The meat that we sell at the end of the whole process is a result of both the animal that we start with plus the method by which we raise it. You could put the ‘best’ pedigree animal into a fast-paced, intensive system where they barely see the light of day and those pedigree papers will count for nothing when it is compared to a high welfare, slow-grown animal that has produced succulent meat by foraging in a stress-free natural environment.

In short, the desired outcome is what determines the animal we choose to start with, and our customers tell us that we are choosing very well…