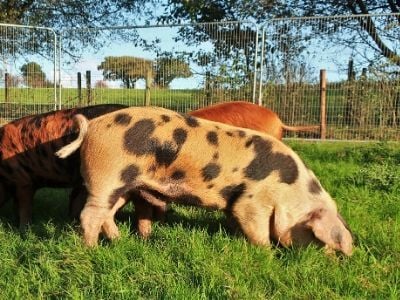 Our pigs have had an interesting few weeks. Let’s fill you in on their antics…

We’ve kept pigs for about a dozen years now, using various enclosure types; electric fencing in woodland and grassland, stock fencing, stables and barns with outside access and even an enclosure with an old glasshouse roof as a sun spot. Now, we can add riot fencing to our portfolio!

The reason: this batch of pigs are escape artists! 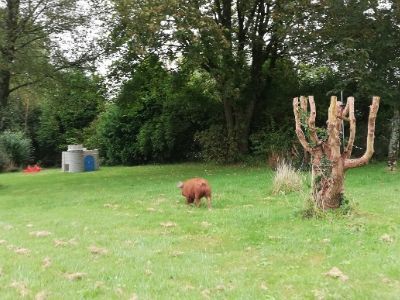 Over a number of days, we found differing amounts of pigs in the field at each feed time – and rarely six, as there should have been… Even after we’d gone around the field with a fine toothcomb, securing any areas that looked even vaguely likely to be a weak point, they still found a way round, under or through all obstacles.

We were not to be beaten by half a dozen swine. It was time to call in the big boys.

Funnily enough, by solving this new predicament we managed to solve another evolving predicament. (There are always predicaments to be overcome in farming!) Our wonderful, characterful goats had been slowly destroying our fences. It’s commonly known that goats love browsing. Not a problem. The problem comes from the fact that goats browse en masse. Up they go standing on their hind legs, all together, putting their collective weight on the top of the fences… The fence doesn’t come down, but it sags, massively reducing its effectiveness – especially once the cattle come back into that particular field. 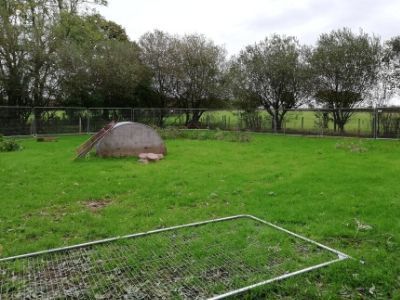 Our new ‘riot fencing’ solves all that. It’s revamped the pig field, keeping the pigs safe and secure and us far less fretful – and spending less time moving pigs off the garden! We can also section off areas of our fields to prevent the goats from causing damage, before easily removing the fencing to allow the cattle back in to graze and browse those areas. The goats still have plenty of areas to browse safely, don’t worry, and we always take them any branches that we clear during tidying round the farm. They come running!

For every problem, there is a solution. Even if the solution itself occasionally causes different, new problems…